It has been a long trip from Kyoto to Cairns : 2 trains, 1 eight hour flight (nearly missed it because of a new visa requirement we were not aware of) and a short drive to reach Palm Cove, a family  resort of the north eastern coast of Queensland. We landed at 4am and checked in just in time to see the sunrise. Wow. Exactly what we needed after two months of packing, moving, planning, travelling. Thumbs up for the children who were really patient and surprise us every day with their ability to feel at home anywhere.

Our hotel is located half way between Cairns and Port Douglas, and some 60 miles away from the Daintree River and Rainforest. It is the “wet season” but the locals say it has been really dry. 28 to 34 degrees, with occasional  light to heavy rain, just what you need to cool off.

The beaches are incredible. Unspoiled, pristine, paradise like. No one in the water.

There is a reason for this : this is the kingdom of estuarine crocodile (aka: the Big Salty), which can measure up to 8 metres long and are hungry enough to eat a horse or a cow, as well as the home of deadly stinging jellyfish. As the hotel staff told to us when we arrived : “Keep clear of the Jellies – the’re pretty dangerous. If they sting you, well, you die”. We learned today that when stung, the pain is so awful that victims typically pass out and drown. The ones that survive have terrible scars and feel the pain for weeks after the incident. Welcome to Oz.

So the rules are : stay 2 metres away from the waters edge and don’t ever go into the water.

I thought it would be frustrating, but I am starting to love it as it keeps the beaches clean and natural, and we still can enjoy a really nice lagoon pool at the hotel. Our trip to Cape Tribulation, where Captain Cook badly damaged his ship in 1770, gave us the impression nothing has changed here since. 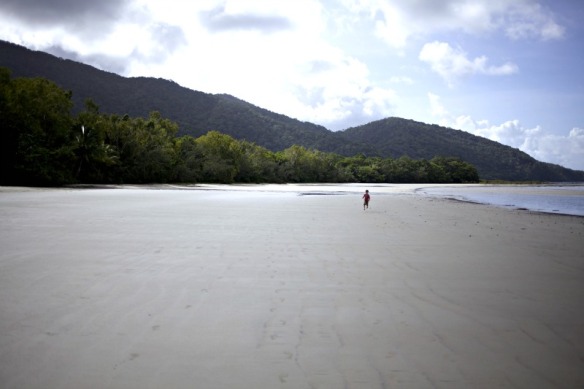 Since we arrived, we have seen a lot of animals, some really fun or sweet, some others really dangerous and repulsive. The children loved the kangaroos and wallabies, 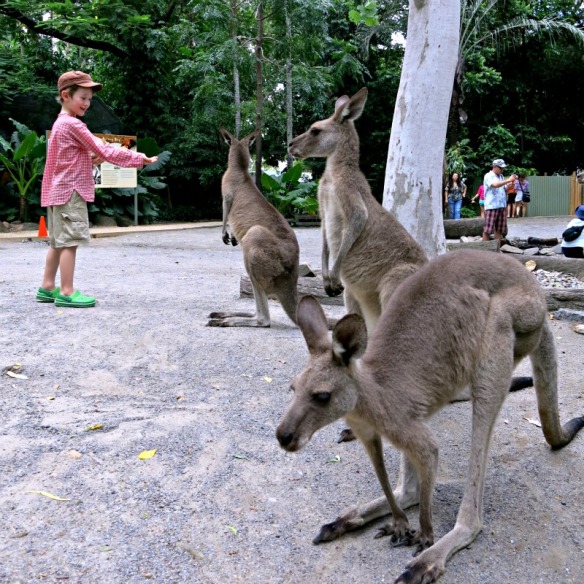 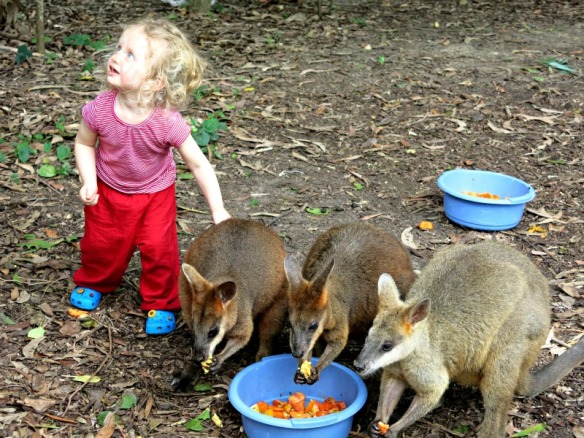 and I had a little crush on Michaela, a female Koala I had the opportunity to hold for a couple of minutes.

We met cassowaries on our way to the rainforest, and got introduced to several “saltiies” (salt water crocodiles) and “freshies” (their river counterparts) in a crocodile farm. We’re not about to forget the terrifying noise of their jaws … so clear, yet so powerful. Also, many colourful frogs, snakes, spiders, scorpions, turtles, and all sorts of birds. 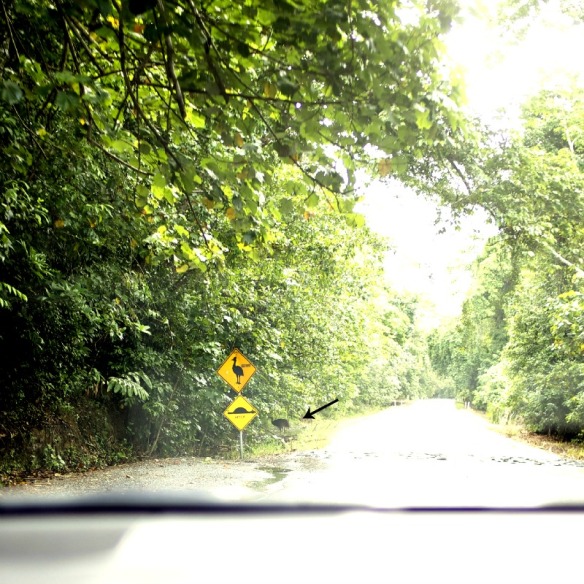 We enjoyed walks in the rainforest, surrounded by hundreds of species of plants. Alvar spotted some flying foxes and Ben found a weird little dragon who seemed glued to the trunk of a tree. This land is so full of life, and it is obvious that man is just one of the multiple species around. He has to fight for his part of the land. 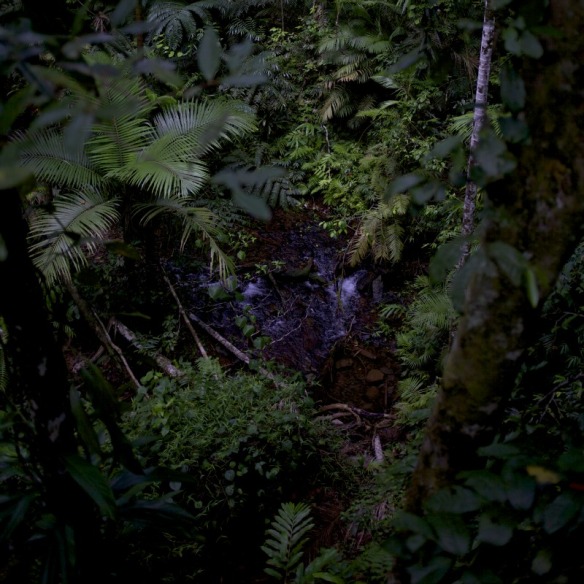 Tomorrow, we will get a closer look to the Great Barrier Reef.

4 thoughts on “Down Under”